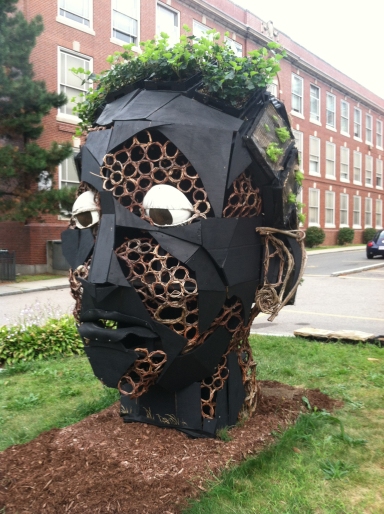 This project began with an residency at the Jeremiah E. Burke High School, in an investigatory project to engage students in creating a large scale Oriental Bittersweet vine sculpture. Participants were students in MassArt Ed alumnus Alisa Rodny’s art class, and with John Crowe advising the initial stages of the project. Burke Students came up with initial ideas of what to make, assisted in preparing materials for cutting, putting the structure together, and in creating the vine mesh that would become the “skin”. The Head moved to the Boston Latin School, where it featured plants as a growing head of “hair” in essence “Sprouting Green Ideas” and making a connection to the new green roof on the school.

Process info about this project:

This project began with a conversation with four students interested in creating a collaborative sculpture. We agreed that it should be BIG, make people notice and say “woah” and have the potential to get the attention of the media. We also agreed that it should describe them and the issues they deal with, and be controversial without being offensive. The topics they raised as being most concerning were violence in the community, messages being pushed at them from the media and the entertainment business, and consumerism. We thought the best idea was to make a blindfolded face, half boy / half girl, about 7’-8’ tall. They envisioned this sculpture being placed outside in front of the school. Ambitious! But we decided to give it a shot. The guiding questions that emerged were: “What are we blinded by? What are we blind to?”

Structural considerations were worked through with staff from Stonybrook Fine Arts, and I created a scale sketch model for feedback from the students and the school.

We agreed on the design and began building. Students assisted with certain aspects, such as using an overhead projector to enlarge the scale model, laying out the components that needed to be cut, assembling the head, and making the vine-mesh skin. This was an unusual opportunity for students to participate in the process of creating a large scale sculpture.

We placed pieces of the scale model on the overhead projector and traced the outline of the image onto trace paper. We then laid the trace paper onto 4′ x 8′ plywood sheets and marked out the forms.

I cut the plywood in the hallway behind the art classroom.

We put in the wood sections, made sure they were level, and firmly attached to the structure. Students sanded the plywood and then put on a coat of primer to protect the plywood for installation outdoors.

Students helped create loops with oriental bittersweet vines to contribute to the “skin”. The loops are attached in honeycomb shapes and then those shapes are attached to each other and then hung onto the structure.

While working on the skin, the depth of the structure made us think of what goes on in a person’s head – and we decided that we wanted to show what that is, rather than simply creating a “skin” to cover the structure. During our discussion, students came up with ideas that we formed into guiding questions: What is in the back of your mind? How can we use the deep space in the sculpture to reflect the depth of our thinking? What is going on inside our heads? How do things in our past exist beneath the surface of our skin?

However, just as we got to this exciting step of the process we ran out of time! My residency was over for the year and we had to move the sculpture out of the hallway. I was disappointed that we had bit off more than we could chew for this giant head. This was an important thing that I learned in this “studio investigation” – time management when collaborating with high school students is hard to predict. To go with good ideas requires a shift in time, and things often take longer than one might think.

The head was relocated to my workspace in Roxbury. The Burke students role in this collaboration was over, but I was committed to finishing it. First I needed to solve some of the aesthetic problems with the head: how was the hair going to work? I created a framework of wooden rectangles to insert plastic trays with plants in them. I also needed to figure out how to make the “skin” have more of a form – the vine loops alone were not working. I chose to create a hybrid surface of wood planes and vine loops to create an expressive face.

As I was working on the head, I found out that the Boston Latin School was in the design phases of creating a green roof. I told them about this project and they asked if it could be put in front of their school to act as a visual bridge to the future green roof. I thought that would be great to put the sculpture back to the hands of high school students! In it’s new life at the Boston Latin School, the sculpture will take on new meanings. Instead of being blindfolded, the head will have eyes wide open and grass growing out of the head, “sprouting green ideas”. The head becomes a symbol for innovation and sustainability.